THE EASIEST PART OF THE MOVE 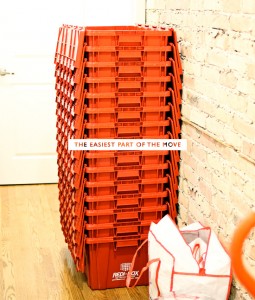 When it came to the move, the easiest part of the whole process was hands down working with Redi-Box.

Redi-Box was kind enough to let us try their service and have me share an honest review of what it was like to work with their reusable boxes.

Fortunately for me, I have only glowing things to say about the company and the extremely simple process. 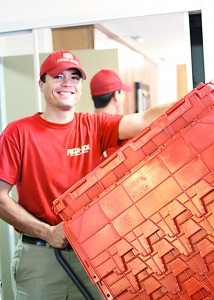 As you can see, I didn’t even have to lift a finger. Bobby came in and dropped off the boxes exactly where I asked. 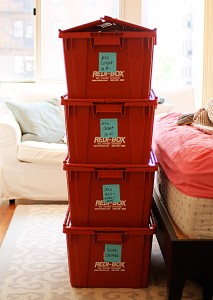 He also gave me a pack of sticky labels so I could track what went in each box.

Because Mr. Lively and I were doing trips to the new apartment the two days before the movers came, we ordered the studio level of boxes (15) and reused them a few times. It was as simple as removing one label and replacing it with another.

Since Mr. Lively was in charge of moving the boxes in each location (I was the packer), I asked him what he thought about working with the reusable boxes vs. the traditional cardboard ones we also used which were left over from Jess LC inventory. He felt it was nice to not worry about the boxes breaking under pressure. He also liked how they stacked when taking them to the car.

The only drawback he found was stacking them in our tiny Prius was not very easy due to their height. But for the traditional movers we had on Sunday this was not a problem at all. They simply stacked them along the walls of the truck and carted them over to the new place. 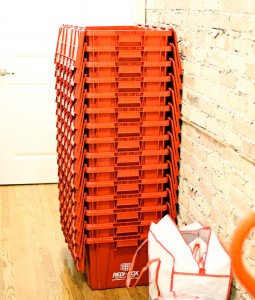 Because I was  ambitious, I set up the pick up time to be just two days after the move. This helped speed up the unpacking (meanwhile we still have cardboard boxes filled with things yet to be put away).

And once more, during the removal process I didn’t need to lift a finger. They came and picked them up on time and were very friendly and professional.

Overall, I definitely prefer moving with Redi-Boxes over cardboard ones. Considering how easy and reliable the pick-up and delivery service is, it even beats buying or scavenging for traditional boxes. Two thumbs up for Redi-Box in my book!